This is a live blog from the College Station City Council’s workshop and regular meetings on Thursday, Dec. 13. It’s not the official minutes.

The workshop and regular meetings can be watched live on Suddenlink Ch. 19, or online. An archive of previous council meetings also is available on the website.

The workshop meeting has started.

The council recognized several city employees who have reached 20, 25, 30 or 35 years of service. The lone 35-year employee was Water/Wasterwater System Operator Jeff Boriski (below with City Manager David Neeley and Mayor Nancy Berry), who began working for the city in the spring of 1977. 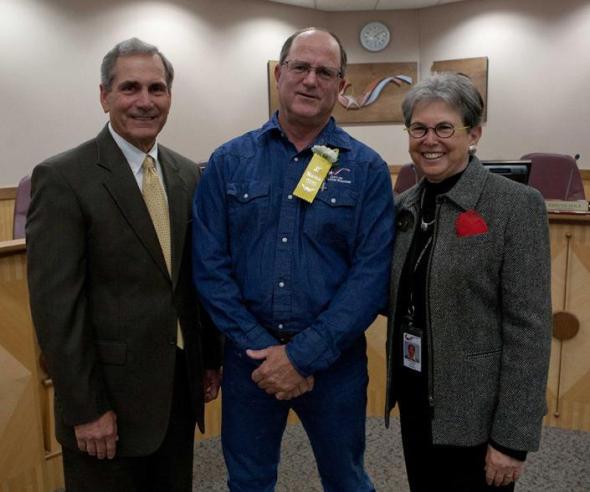 Water Service’s Environmental Technician James Boykin (below with Neeley and Berry) was named as the city’s 2012 Employee of the Year from a field of 13 nominees. When the city sought cost estimates for developing a comprehensive plan that flushes water lines and improves water quality, one proposal was for about $1 million.  In his 13th year with the city, Boykin stepped up and said he could develop one just as good, and cheaper — and he did.

The council has gone into executive session and will return to the workshop agenda at about 6 p.m.

The workshop meeting has resumed.

The council heard a presentation on a proposed $95,195 contract with BerryDunn to conduct an analysis of the city’s financial and management  software and recommend alternatives. The council will consider approving the contract as part of the consent agenda in tonight’s regular meeting. The possible replacement of the software has significant implications regarding scope, complexity and potential cost.

The council discussed its annual strategic plan and reviewed potential agenda items for the workshops scheduled for Jan. 28-29. The council meets each year in a multi-day workshop to review and update its strategic plan in preparation for development of the following fiscal year’s budget. Agenda items requested by the council include a strategic plan review and update, disposition of the conference center, Lick Creek Nature Center design and programming, impact of recent budget reductions on city services, funding of infrastructure to undeveloped areas, and the city’s electric power supply.

After discussing the council calendar, future agenda items and receiving committee reports, the workshop was adjourned. The regular meeting will start after a short break.

After a public hearing, the council voted 6-1 to remove parking from the fire hydrant side of Keefer Loop and Cullen Trail in the Buena Vida subdivision to allow easier access for emergency vehicles. Councilmember James Benham voted against the motion. By a 4-3 vote, the council rejected a proposal to also remove parking along one side of Toni Court. Councilmembers Karl Mooney, Jess Fields and Benham supported the motion.

After a public hearing, the council voted 6-1 to designate eastern and western portions of the Medical District as Tax Increment Reinvestment Zones (TIRZs). Councilmember Jess Fields voted against both designations. With tax revenue from new development in the area, the TIRZ could help pay for about $60 million in needed infrastructure over the next 20 years.

After a public hearing, the council heard a presentation on the possible creation of two Municipal Management Districts (MMDs) in the Medical District. One MMD would be for the portion of the Medical District that’s already developed and the other for the portion that will be developed. In January, the council will consider a resolution to support state legislation creating the MMDs.

The MMD for the developed area would focus on marketing, promotion and enhanced services such as landscaping or wayfinding. The MMD for the undeveloped area would address the same issues but also would focus on the delivery of necessary infrastructure. The MMDs would have the authority to identify projects and establish assessments on the properties that benefit from them. Only in the undeveloped MMD is an additional ad valorem tax being considered. This tax, which must be approved by voters, would only apply to properties in the undeveloped MMD and would be used to compliment the TIRZ funding of infrastructure.

This entry was posted on December 13, 2012 by City of College Station. It was filed under City Council, Public Communications and was tagged with city charter, City Employees, Council Meetings, economic development, employee of the year, employee service awards, information technology, Medical District, planning.