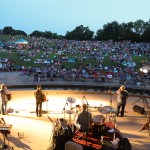 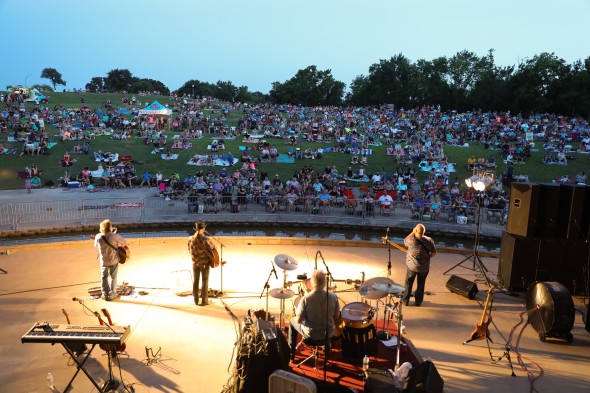 For 19 years, the Starlight Music Series has attracted music lovers of all kinds for free, family-friendly entertainment under the stars at the beautiful Wolf Pen Creek Amphitheater.

The 2020 Starlight Music Series begins May 2, followed by shows on May 16, May 30, and June 6. We invite families, friends, and visitors to bring your picnic baskets, coolers, blankets, and lawn chairs for four Saturday nights of rockin’ fun.

The legend lives on with Britishmania, the World’s Best Beatles tribute band. With mind-blowing performances and true-to-era attire, Britishmania recreates the revolution that changed the world. The foursome delivers note-for-note theatrical performances that will take you back in time.

Bidi Bidi Banda is Austin’s first all-star Selena tribute. Composed of members of some of Austin’s premier Latin bands, Bidi Bidi Banda is the dream of Stephanie Bergara, a native Austinite who grew up listening to Tejano radio and singing to a hairbrush while wearing her mother’s red lipstick. The band’s interpretation of Selena’s greatest hits will leave you belting lyrics, doing the washing machine, and reliving greatness of the Queen of Tejano Music.

May 30: Infinite Journey with guest Desperado

Infinite Journey is an international Journey tribute band based in Dallas that has been performing high-energy shows across the country since 2012. The five-piece group delivers a musically immersive Journey experience, focusing on the overall sound, solos, and soaring vocals that made Journey iconic.

Louisiana-born R&B vocalist Bryson Bernard, popularly known as Cupid, first sang in his church choir and was encouraged by his pastor father. Cupid shuffled his way into the hearts of millions with the up-tempo party song, “Cupid Shuffle,” which also inspired the popular dance craze of the same name.

Load up your coolers, blankets and lawn chairs for another packed schedule of open-air concerts at the Wolf Pen Creek Amphitheater.