This is a live blog from the College Station City Council’s workshop and regular meetings on Thursday, Jan. 10. It’s not the official minutes.

The workshop meeting has started.

The council recognized the centennial anniversary of the American Society of Civil Engineers. Receiving the proclamation were engineers representing the Texas Section of the ASCE, the cities of College Station and Bryan, and private industry. College Station staff civil engineers pictured below are Chuck Gilman, David Coleman, Alan Gibbs, Stephen Maldonado, Jr. and Troy Rother. 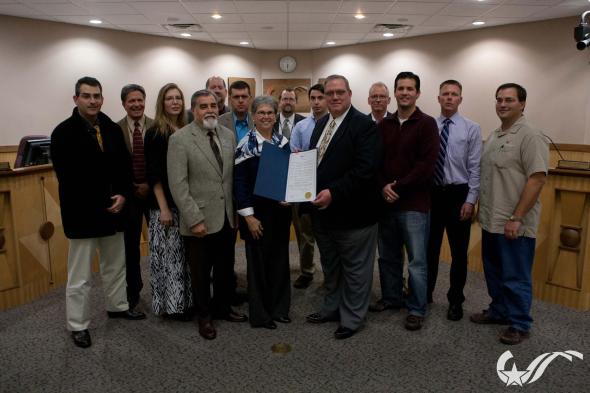 The council received a workshop presentation on Phase II of the city’s Economic Development Master Plan, including the results of a recent survey of local businesses.

Mayor Nancy Berry presented a proclamation to Mike Beal (on the right in the photo below). Beal is owner of Century 21 and was recognized recently as the Better Business Bureau’s Boss of the Year. BBB-Brazos Valley President/CEO Bill McGuire is pictured with Beal and Mayor Berry.

The council recognized Steve Beachy for his service on the Brazos Valley Groundwater Conservation District Board. The council will discuss Beachy’s replacement on the board later this evening.

Three people spoke during hear visitors, when citizens can address the council about items that don’t appear on the posted agenda. One asked for an exemption from the local animal ordinance, and the other two spoke against the private landfill proposed west of the city.

The council pulled this item for a separate vote:

After a public hearing, the council voted 6-1 to approve a resolution supporting state legislation to create a Municipal Management District (MMD) in the area generally west of the Rock Prairie Road Bridge at State Highway 6. Councilmember Jess Fields voted against the motion. This MMD includes the two hospitals and will emphasize marketing and promotion, and limited service enhancements and improvement projects.Funding of these activities will come from assessments and other means described in the proposed legislation and approved by the MMD Board.

The council will take a short break and will consider Municipal Management District No. 2 when it returns.

The regular meeting has resumed.

After a public hearing, the council voted 6-1 to approve an amended resolution supporting state legislation to create a Municipal Management District (MMD) in the area generally east of the Rock Prairie Road Bridge at State Highway 6, and includes most of the district’s undeveloped properties. Councilmember Jess Fields voted against the motion. This MMD will focus on complimenting the Tax Increment Refinance Zone funding for select improvement projects, marketing and promotion, and limited service enhancements and improvement projects. Funding of these activities will come from ad valorem taxes, assessments and other means described in the proposed legislation and approved by the MMD’s residents and MMD Board.

Earlier, the council voted 4-3 to approve an amendment to the resolution regarding the board’s structure. Councilmembers Karl Mooney, Blanche Brick and John Nichols voted against the motion.

Here’s the PowerPoint presentation on both MMDs received by the council:

The council unanimously approved Brien Smith to the Twin City Endowment Board of Directors.

The council unanimously approved Bill Harris as the city’s representative on the Brazos Valley Groundwater Conservation District Board. Harris is the former Director of the Texas Water Resources Institute at Texas A&M, and is a recognized expert in the field of water resources.

The council voted 6-1 to approve an engagement letter for $105,000 with Allen Boone Humphries Robinson, LLP for services connected to the creation of two municipal management districts in the Medical District. Councilmember Jess Fields voted against the motion.

After a public hearing, the council unanimously approved the rezoning 1.24 acres at 3800 State Highway 6 South from CI Commercial Industrial to GC General Commercial.

After a public hearing, the council unanimously approved an amendment  to the city’s Unified Development Ordinance related t0 the Easterwood Field Airport Zoning Ordinance and eliminating a duplicate Section in Article 5.

The regular meeting was adjourned and the council resumed the workshop agenda.

The council was updated on the Green College Station Action Plan, which was developed after council asked staff to focus on environmentally conscious, yet fiscally responsible, programs and initiatives.

The mayor paid tribute to City Manager David Neeley, whose last day with The city is Friday.

The workshop meeting was adjourned. The council meets again on Jan. 24.

This entry was posted on January 10, 2013 by City of College Station. It was filed under City Council, Public Communications and was tagged with budget, Council Meetings, economic development, planning, projects, rezoning.