The following message was authored by Henry Mayo, a surveyor and long-time resident of the Bryan-College Station area. As a surveyor and historian, Henry retrieves information from local, state and national resources to assemble history-themed messages for email subscribers in a series titled “This Week in Brazos County History.” To subscribe to Henry’s email series, click here.

NOTE: Boy, I feel dumb for missing one of the biggest anniversary dates of the year last week. Being on the College Station 75th anniversary planning committee makes it even worse!

I don’t have a copy of The Eagle or Battalion from last week in 1938, but these clippings from The Eagle are in the scanned College Station publicity notebook on Project HOLD. 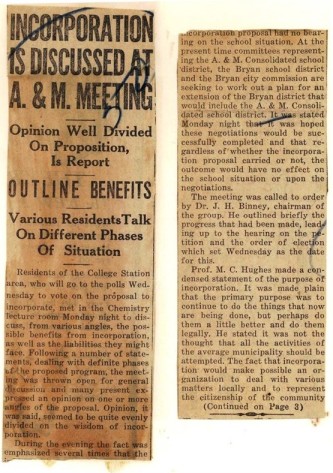 The item on the right from Oct.18, 1938 tells of an informational meeting at the A&M Chemistry lecture room on Monday, Oct. 17. I believe the “school situation” mentioned refers to the City of Bryan’s recent southward annexation, including part of the A&M Consolidated school district known as Union Hill.

The scrapbook item on the left is from The Eagle of Oct. 20, the day after the incorporation election. It tells the outcome — 217 voted for and 39 against incorporation. The election was the result of a petition presented to the county judge on June 2, 1938.

Therefore, Oct. 19, 1938 is considered College Station’s actual birthday, although the town’s name had already been used for at least 50 years. According to the book “College Station Texas 1938/1988” by Deborah Lynn Balliew, the polling place was appropriately located at the Southern Pacific train depot. This was the College Station, a train and mail stop along the old Houston & Texas Central railroad. 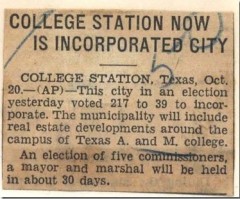 The small clipping on the left is from the Oct. 21 edition of the Beaumont Enterprise, but ran almost verbatim in at least 10 newspapers around Texas on the same day. The CS publicity scrapbook includes about eight examples from around Texas.

Be sure to mark your calendars and tell your friends and neighbors not to miss the Saturday, Nov. 16 opening of the College Station 75th Anniversary festivities and exhibit opening at the George Bush Presidential Library and Museum. A classic car show will be outdoors at the museum, and the Union Pacific mini-train will be giving rides. If you are interested in showing a classic car, a registration form is available online.

The city website has information and links to all the events, which begin the evening of Thursday, Nov. 14, with a showing of “We’ve Never Been Licked,” a movie filmed on campus in 1943. The festivities continue with a re-dedication ceremony at Richard Carter Park at 11 a.m. Friday, Nov. 15, and a homecoming BBQ dinner that evening.

Feel free to contact me if you have any questions about the CS75 events. If you miss this party, you will have to wait 25 years for the next big one!

Have a great week!

This entry was posted on October 28, 2013 by City of College Station. It was filed under Historic Preservation, Public Communications and was tagged with 75th anniversary, history, incorporation.