Welcome to our live blog from the College Station City Council’s workshop and regular meetings on Thursday, Oct. 8. It’s not the official minutes.

The council took action on one item discussed in executive session. By a 7-0 vote, it approved an amendment to the Research Valley Partnership’s bylaws that permits elected officials to be appointed for additional terms or partial terms by their respective city councils or the commissioners court not to exceed their time as an elected official.

The mayor adjourned the workshop after the council discussed its calendar, future agenda items, and committee reports. The regular meeting will start at 7 p.m.

Mayor Nancy Berry proclaimed October as Down Syndrome Awareness Month with a presentation to the Down Syndrome Association of the Brazos Valley. Accepting the proclamation from the mayor were (below, l-r) Stephanie Barbee, Dillon Dyke, Caleb Benner and Cynthia Benner. 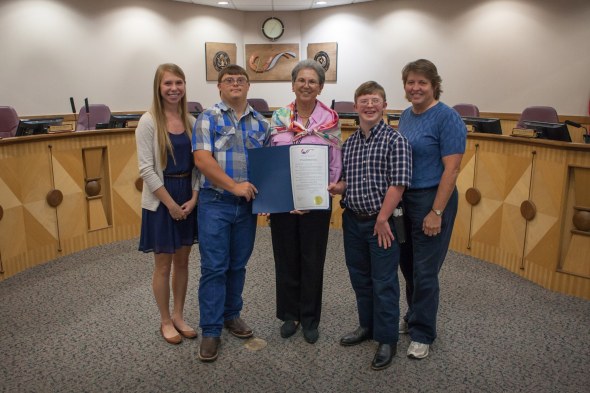 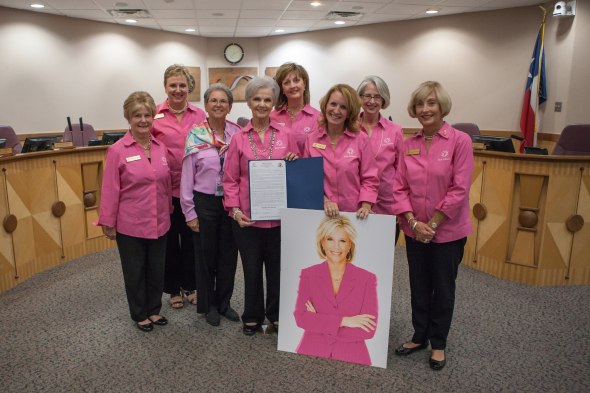 One person spoke during Hear Visitors when citizens may address the council on any item that doesn’t appear on the posted agenda. Ben Roper recognized Army Staff Sgt. Gary Collins as part of the Fallen Heroes Memorial program. The 32-year-old Hardin native died when an improvised explosive device hit his Bradley Fighting Vehicle on Nov. 8, 2003, in Fallujah, Iraq.

The council voted unanimously to approve these consent items:

These items were voted on separately:

After a public hearing, the council unanimously voted to allow food vendors to develop short- and long-term mobile food courts through conditional use permits and the site planning process. The motion included several adjustments to the draft ordinance.

With the growth of the mobile food industry, a local vendor requested a way to establish a mobile food vendor court in College Station. Food trucks could already congregate at sales locations in certain circumstances, but the ordinance amendment allows for a food court that provides amenities such as seating and a playground at a predictable operating location. Input on the ordinance was solicited from local mobile food vendors, the Brazos County Restaurant Association, the Northgate Business Association, and the Brazos County Health Department.

A short-term mobile food court (two years maximum) would provide some customer amenities with the least amount of development. Because of its temporary nature, a short-term court would not involve breaking ground or providing a level of development not easily reversed overnight.

A long-term mobile food court would be a permanently located business that provides the most amenities and would have development standards similar to those of brick-and-mortar restaurants. Both short-and long-term mobile food courts would not be developed by right but would require permission from the city council through the conditional use permit and site planning process.

After a public hearing, the council unanimously voted to establish boundaries for the crossing of the Spring Creek transmission line through the Lick Creek greenway bordered by city property to the west and Brazos Valley Solid Waste Management Agency property to the east. The transmission line upgrades are required due to ERCOT modeling studies showing overloads under certain conditions.

After a public hearing, the council unanimously changed the zoning district boundaries from Rural to General Suburban for 4.3 acres between Passendale Lane and Leyla Lane. The change was made to allow for development.

The council unanimously appointed Ron Kaiser to another two-year term on the Brazos Central Appraisal District board of directors.