Welcome to our live blog from the College Station City Council’s workshop and regular meetings on Monday, May 16. It’s not the official minutes.

The workshop has started. Councilman James Benham is absent tonight.

Elliott said the CVB’s accounting procedures and controls have improved since the last audit in 2011 but added that the CVB also has a relatively large amount of liquid assets. In addition, certain cost analysis methods may be able to aid the CVB in better understanding project returns.

According to Elliott, the CVB’s direct impact on bringing events to the College Station and Bryan area has not significantly changed since 2011, with the most impact being on sports events. The CVB’s expenditures have also increased since 2011, especially on marketing and personnel.

Elliott said employee turnover at the CVB appears to be high and that some of CVB’s strategic goals seem disconnected from its mission. He added that the Destination Marketing Association International calculator could be a useful tool for internal CVB decision making, but policymakers should be skeptical of using the calculator to provide justification for funding requests.

The council was updated on the design status of a new police facility at the southeast corner of the Dartmouth Street-Krenek Tap Road intersection.

The consensus of the council was to move forward with the size estimate of 79,000 square feet and to modify the Krenek Tap Overlay to better accommodate construction. Upon the recommendation of staff, the council decided not to house Fire Department administrators in the building.

The mayor adjourned the workshop after the council discussed its calendar, future agenda items, and committee reports. The regular meeting will start after a short break.

Mayor Nancy Berry proclaimed this as National Public Works Week with a presentation to several employees of the city’s Public Works Department. The week is designed to recognize the contributions public works officials make every day to our health, safety, comfort, and quality of life. 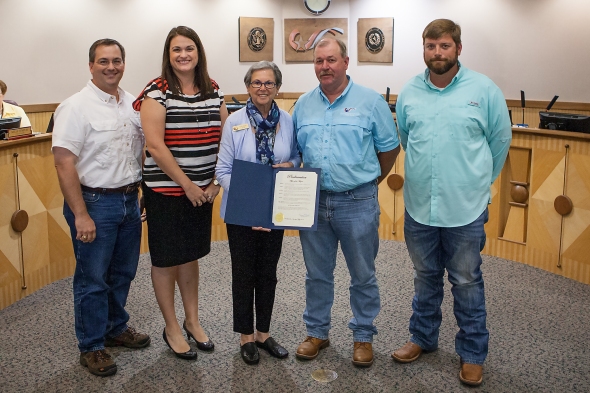 Mayor Berry proclaimed May as National Bike Month with a presentation to members of the city’s Bicycle, Pedestrian and Greenways Advisory Board. Sponsored by the League of American Bicyclists, National Bike Month promotes bicycling as a healthy activity that helps the environment. Pictured with Mayor Berry below are Councilwoman Blanche Brick, Greenways Program Manager Venessa Garza, and Bicycle, Pedestrian and Greenways board members Tina Evans and Brandon Boatcallie.

The Arts Council of Brazos Valley and Brazos Valley Art League, through the generous support of the Astin Winkler Charitable Trust, award multiple scholarships each year to promising young artists in the Brazos Valley. The College Art Scholarship is open to graduating seniors in Brazos, Burleson, Grimes, Leon, Madison, Robertson, or Washington counties who will attend an accredited college or university with a course of study in the arts, culture or heritage fields.

This year’s scholarship recipients are Ester Araujo and Bryson Bounds from A&M Consolidated High School, and Mitchell Bradford of College Station High School. Pictured below with these excellent students are their families, members of the College Station City Council and representatives of the Arts Council Brazos Valley.

The mayor received a donation of $43,361.02 from Brazos Valley Fashion Week to benefit the Fun for All Playground at Beachy Central Park. Upon completion, this playground for people of all ages and abilities will be the only facility of its kind in the region. Considerable work and support for the cause came from students of Lindsay Zahn’s Project-Based Sociology Class at A&M Consolidated High School, who produced this video:

Representing that class tonight were Kacey Corbett, Jailene Lopez and Hailey Phillips, who are pictured below with members of the College Station City Council, representatives of the Rotary, Lions and Kiwanis clubs who are spearheading the private fundraising, Parks and Recreation Department employees, and project supporters.

One person spoke during Hear Visitors when citizens may address the council on any item that doesn’t appear on the posted agenda. Ben Roper recognized Army Pfc. James D. Parker as part of the Fallen Heroes Memorial program. The 20-year-old Bryan native died Jan. 21, 2004 in a mortar attack near Ba’qubah, Iraq. Members of the Parker family were present for the recognition.

The council voted 6-0 to approve the entire consent agenda:

After a public hearing, the council voted 6-0 to approve a request to change the zoning from Rural to Planned Development District for about 26 acres between Wellborn Road and Royder Road near Greens Prairie Road West.

The change will allow the development of clustered single-family residences.

After a public hearing, the council voted 6-0 to approve a request to change the zoning from Light Industrial and Heavy Industrial to Suburban Commercial for a 1/2-acre at 150 Graham Rd.

The change will allow the development of a daycare facility and retail/office space.

Agreement with MUD No. 1

After a public hearing, the council voted 6-0 to approve a strategic partnership agreement with Brazos County Municipal Utility District (MUD) No. 1 that outlines the terms and conditions for annexing the area.

The city council created the district in 2014 for the Texas World Speedway property.

After a public hearing, the council voted 6-0 to abandon a public utility easement at 105 Holik St. to accommodate a building expansion on CSISD property.

After a public hearing, the council voted 6-0 to approve an ordinance removing parking on both sides of Jane Street and Eisenhower Street between University Drive and Cooner Street.

The change was made to allow emergency vehicle access to the proposed Embassy Suites development.

After a public hearing, the council voted 6-0 to approve an ordinance removing parking on part of Boyett Street to allow fire department access to the proposed Northgate Park Apartments development.

The council voted 6-0 to authorize the issuance of up to $30.5 million in Certificates of Obligation (Series 2016) to provide resources for streets, police station design and initial project costs, information technology, electric and water improvements, and debt issuance costs.

This debt issue will not affect property tax rate or utility rates.

The council voted 6-0 to authorize the issuance and sale of up to $56 million in General Obligation Improvement and Refunding Bonds (Series 2016) to achieve savings due to lower interest rates.

The refunding is estimated to reduce the overall cost of the bonds by at least 12.618304 percent over their remaining life, saving at least $3.96 million. The savings will help the city by providing an additional margin council may choose to use for projects not currently funded.

The refunding will not impact the property tax rate.

The mayor adjourned the meeting. The council meets again on Thursday, May 26.