Welcome to our live blog from the College Station City Council’s workshop and regular meetings on Thursday, August 25. It’s not the official minutes.

The mayor adjourned the workshop after the council discussed its calendar, future agenda items, and committee reports. The regular meeting will start at 7 p.m.

The regular meeting has started. Boy Scout Troop 1300 led the Pledge of Allegiance. 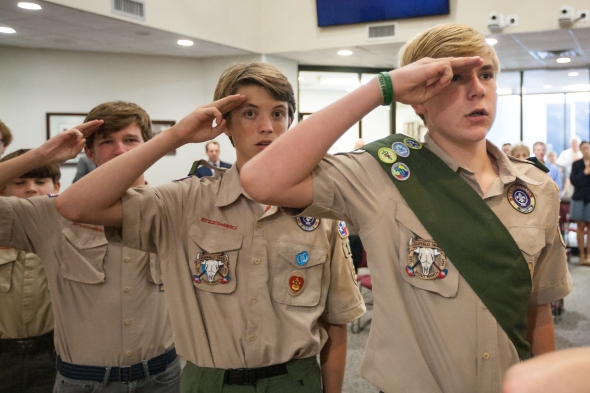 Mayor Nancy Berry presented a plaque to Planning & Development Services Director Lance Simms recognizing his department for receiving the 2016 Certificate of Achievement for Planning Excellence issued by the Texas Chapter of the American Planning Association.

Mayor Berry presented a proclamation recognizing Municipal Court Operations Supervisor Marie Barringer for becoming a certified court manager after her recent graduation from the Court Management Program. The program is sponsored by the Institute for Court Management and the Texas Municipal Courts Education Center. Since 2000, about 500 court professionals from across the United States, Canada, Puerto Rico, and the Virgin Islands have achieved certification.

The council thanked Wayne Beckermann of Texas A&M’s Student Government Association for representing the A&M student body at council meetings over the last year. Beckermann introduced student senators Joseph Hood, Ben DeLeon, and Carter Stratham, and announced that Stratham would be the new student liaison to the council.

One person spoke during Hear Visitors when citizens may address the council on any item that doesn’t appear on the posted agenda. Ben Roper recognized Army Spc. Michael G. Karr, Jr., as part of the Fallen Heroes Memorial program. The 23-year-old San Antonio native died March 31, 2004, when an improvised explosive device hit his armored personnel carrier in Habbaniyah, Iraq.

After a public hearing, the council voted unanimously to approve a request to change the land use designation from Business Park to General Commercial for about 14 acres near The Science Park across Earl Rudder Freeway from Beachy Central Park. The change will allow for commercial development.

After a public hearing, the council voted unanimously to approve a request to change the zoning from Planned Industrial to General Commercial for the same property in the previous item.

After a public hearing, the council voted unanimously to approve a request to change the zoning from Rural to Restricted Suburban and Natural Areas Protected for about 13 acres at 2744 Horseback Court. The change will allow for residential development.

The mayor adjourned the meeting. The council meets again on Thursday, Sept. 8.

Colin Killian (@ColinKillian) has been with the City of College Station since 2010. He previously served 23 years as associate media relations director for Texas A&M Athletics. Killian has also worked as a reporter and editor for the Corpus Christi Caller-Times and Lewisville News. A native of Hobbs, N.M., he graduated from Texas Tech with a bachelor’s degree in journalism/political science.

This entry was posted on August 25, 2016 by City of College Station. It was filed under City Council, Public Communications and was tagged with Council Meetings, land use, rezoning, Ringer Library, streets, The Science Park, water conservation.