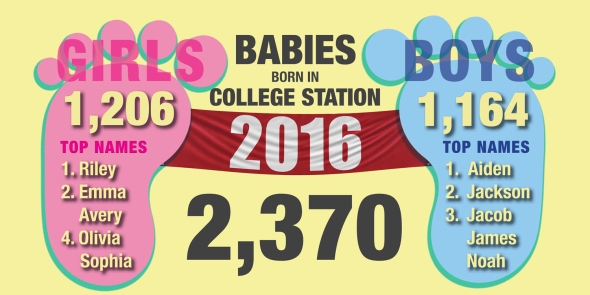 At least, that’s according to the data provided by Yvette Dela Torre, College Station’s award-winning deputy local registrar, who leads our vital statistics reporting efforts and who has grown accustomed to me stalking her around the first of each year.

Thanks to Yvette’s meticulous record-keeping, you can see there were fewer babies born (especially boys) in 2016 compared to the previous year, fewer sets of twins, and some notable changes in the baby name game.

College Station ended 2016 with a population estimate of 109,895, thanks in part to the Aidens, the Rileys and the rest of our 2,370 youngest additions.

One more quick note about our Yvette Dela Torre: She has led the College Station Vital Statistics Division to back-to-back five-star exemplary awards, the state’s highest honor for vital reporting efforts. That’s a really big deal — only 20 out of 468 offices in Texas earned that designation.

This entry was posted on January 23, 2017 by City of College Station. It was filed under City Secretary, Public Communications and was tagged with births.