What happens if you run for city council – and win? 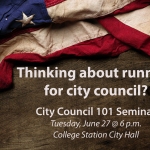 In my years as a deputy city secretary, I can’t count the times I’ve heard a newly-elected city council member ask these questions:

In College Station, city council members devote many long hours to fulfill their responsibilities — and aren’t paid a dime. Before they can serve, they also endure campaigns that take a lot of time, energy, and money.

But what happens after they’re elected?

City Council Places 1, 3 and 5 will be at stake in the Nov. 7 election. If you are considering running, we invite you to attend a free City Council 101 seminar at 6 p.m. on Tuesday, June 27 at the City Hall Council Chambers.

The program is designed to help candidates better understand the requirements, duties, and limitations of the office, as well as open meetings laws and conflicts of interest. We’ll cover our form of government, the role of city staff, and discuss the critical issues facing our community.

Our goal is to help potential candidates make informed decisions about running and to gain an accurate understanding of what’s expected if they are elected.

The filing period to run for council is July 24-Aug. 24. Candidates must be at least 18 years old, U.S. citizens, qualified Texas voters, and College Station residents for at least one year before Election Day.  Candidate information packets are available at the City Secretary’s Office at College Station City Hall.

A certified Texas municipal clerk, Tanya McNutt is in her 10th year as College Station’s deputy city secretary. She served as city secretary in Madisonville from 1998-2008.