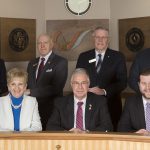 Welcome to our live blog from the College Station City Council’s workshop and regular meetings on Thursday, Nov. 8. It’s not the official minutes.

The workshop has started. The council took no action from executive session.

Martin Zimmermann, assistant director of Planning and Development Services for the City of Bryan, gave the council a brief overview of Bryan’s Residential Conservation District and a recent ordinance amendment that defines and regulates stealth dorms as “Detached Shared Housing.”

The consensus of the council is to televise the Planning and Zoning Commission’s workshop meetings. The regular meetings already are televised on the city’s cable channel.

Mayor Mooney read a proclamation on the Bells of Peace World War I remembrance marking the 100th anniversary of the armistice that ended the fighting on Nov. 11, 1918. Some 116,516 Americans died in the war, and another 200,000 were wounded. The United States World War I Centennial Commission calls upon all Americans to toll bells at 11 a.m. on Sunday – the 11th hour of the 11th day of the 11th month – in remembrance of those who served.

The council unanimously approved Kirksey Architecture’s exterior rendering of the new city hall, which will be located behind the existing facility on Texas Avenue. The rendering was completed with input from the council’s Architectural Advisory Committee:

The site was dedicated this afternoon:

The consensus of the council was to continue exploring the creation of an electric advisory board to govern College Station Utilities.