The $341 million budget was presented to the city council on Monday at the first of three dedicated workshops at the CSU Meeting and Training Facility. Additional workshops will be Tuesday and Wednesday.

The proposed budget is about $19.7 million below last year’s budget because of the timing of capital project appropriations. The governmental fund’s budget totals about $105.2 million. This includes the general fund, which pays for public safety, public works, planning and development services, and administration. Enterprise budgets such as utilities are about $146 million and capital projects are just over $71.1 million. Special revenue fund budgets such as hotel taxes, community development, roadway maintenance, and impact fees total about $18.8 million and have restricted uses. 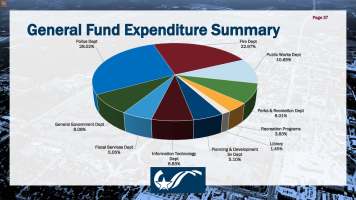 While property values continue to rise and bring in new revenue, it’s not enough to provide the infrastructure and levels of service our current and future residents need and deserve.

The proposed budget includes a 2.8777-cent increase in the property tax rate to 53.4618 cents per $100 of assessed value. Electric and wastewater rates won’t change, but a 15% increase is recommended for water rates to meet our existing and future capital infrastructure needs related to growth, and to ensure the water fund remains at stable levels in the coming years.

“We proposed this budget in a way to address the needs of a growing community, as well as to maintain the excellent quality of life for our current residents,” City Manager Bryan Woods said. “We must, of course, always be prudent with available resources. The proposed budget attempts to take a strategic approach to address our community’s short- and long-term needs.”

While continued growth is a positive thing, the rapid pace strains city services such as public safety, transportation, and utility systems, as well as other core services.

Here are seven major points to consider about the proposed budget:

Continued growth in the city’s overall and student populations must be addressed and play a major role in the budget process.

The college student population grew 33.5% from 2008 to the fall of 2018. The enrollment numbers don’t include the impact of the RELLIS campus opening last fall in Bryan.

Revenue sources for the General Fund include property and sales taxes, fines, service charges, and a transfer from enterprises such as utilities that are city-owned.

Sales tax revenue is difficult to predict since it depends on how much consumers spend. Growth in the city’s sales tax revenue has slowed substantially, rising only 2.5% in the two years from 2017 -2019.

Single-family homes have made up 46.6% of the total market value since FY 2013, while Multi-family has increased by 2.4%, and commercial properties have decreased by 3.0%. Properties that are exempt from ad valorem taxes – such as Texas A&M and other government-owned properties — have increased 3.1%, which has had a significant revenue impact.

Based on the final property value numbers received, the FY 2020 effective tax rate — the rate that will raise the same revenue on the same properties — is $.495757 per $100 of assessed value. The adjusted rollback rate – the highest rate allowed before citizens can petition to lower the rate to the rollback rate – is $.534618.

Earlier this year, Gov. Greg Abbott signed legislation to change the cap on the rollback rate from 8% to 3.5% effective for FY 2021. It also reduced the franchise fees the city receives for the use of rights-of-way.

Starting last spring, department directors took a critical look at departmental expenses and made recommendations to the city manager about prioritizing needs and how to address the revenue limitations.

The proposed rate strategically addresses funding for existing commitments as well as known future needs. Woods recommends that about one-third of the revenue generated by the tax rate increase this year be held in the fund balance.

The fund balance is the city’s safety net for emergencies or a downturn. Over the last several years actual fund balance has been between 20-25% of expenses. Bond-rating agencies encourage us to keep a balance equal to approximately 25% of expenses to get the lowest interest rates on our debt. The proposed budget formally moves the budgeted fund balance requirement from 15% to 18%. This demonstrates a commitment to maintain healthy fund balance reserves.

The FY 2020 budget is strategically designed to generate additional funds of approximately $1.5 million to begin addressing current and future public safety needs, including additional police officers and initial staffing for Fire Station No. 7. A study earlier this year found that we need 23 additional sworn officers.

That marks a fundamental shift in the primary revenue source for funding the majority of city services such as police, fire, and roads. The shift is small, but it represents funding stability for our existing commitments as well as a stable revenue source to provide for the needs of the future.

If approved, the city’s overall property tax rate would still rank among the lower half of Texas cities with populations of 75,000-150,000. Only five cities in our population group have a lower operations and maintenance tax rate than College Station’s proposed $.313175.

That brings us back to answering the demand of residents for high-quality services, which aren’t possible without the city’s most valuable resource — our workforce. Maintaining a competitive pay and benefits structure allows us to attract — and keep — well-qualified employees to serve our residents and visitors.

The city trimmed its budget significantly in the years after the 2008 economic downturn. While the police and fire departments grew in the last decade, most other services and departments remained relatively flat.

Meanwhile, the number of city employees per 1,000 population has decreased significantly from 9.7 in 2011 to 8.4 people in 2019. Most of the new city employees in the last decade have been in public safety. The Police Department has added 49 positions (both sworn and civilian) since 2010, while Fire had grown by 42 employees.

The elimination of the jail in the new police facility allows us to reclassify the detention officer positions into three police officer and five police assistant positions. Two other officers are also included in the budget.

Overall, the proposed budget adds 24 full-time equivalent employees, with 16 in public safety.  The six new firefighter positions are contingent upon the award of a federal grant, which will be determined in late August. Half of the salaries of the two new employees in parks will be covered by the Hotel Tax Fund.

Since the city provides essential services, it stands to reason that the largest general fund expense is for salaries and benefits. It’s vital that the compensation plan and benefits attract and retain qualified employees in a highly competitive environment.

Increased growth puts demands on resources and results in the need for service level increases. Service level adjustment highlights include:

Significant capital projects for FY20 include:

The 2019-20 fiscal year is shaping up as another busy one for the City of College Station, which has many formidable challenges ahead. The proposed budget provides the resources to address these challenges while laying a firm and stable foundation for our future.

This time of the year, don’t even try to find College Station City Manager Kelly Templin in his office. He’s behind closed doors with his staff, looking to the future and planning the city’s next budget.

In this week’s podcast, we talk to Mr. Templin about where things stand since the new fiscal year starts in about 90 days.

The City of College Station’s Fiscal Services Department recently earned the distinction of becoming a platinum member of the Texas Comptroller’s Leadership Circle.

We’ve been honored in recent years with a pair of Gold Awards, but only nine of 46 cities with populations of at least 75,000 are platinum members. Before you start thinking this is boring accounting stuff and wondering why you should care, let me explain.

This distinction means the City of College Station has achieved the highest level of online financial transparency when it comes to spending your hard-earned tax dollars.

END_OF_DOCUMENT_TOKEN_TO_BE_REPLACED

This is a live blog from the College Station City Council’s workshop and regular meetings on Thursday, Sept. 11. It’s not the official minutes.

This is a live blog from the College Station City Council’s workshop and regular meetings on Thursday, June 12. It’s not the official minutes.