The meeting was adjourned. The council meets again March 22.

The council unanimously approved Venessa Garza to a three-year term as the city’s representative to the Keep Brazos Beautiful board of directors.

After a public hearing, the council unanimously approved the rezoning of 11 acres at the northwest corner of the Texas Avenue and University Drive intersection to allow for a mixed-use and multi-family redevelopment. All existing buildings, including the former Plaza Hotel tower, will be demolished before building permits will be issued. Improvements to the intersection are expected to offset the impact of the development on traffic.

END_OF_DOCUMENT_TOKEN_TO_BE_REPLACED 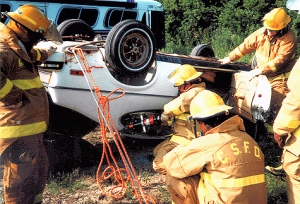 A drunk driver runs a red light and is broad-sided by a car driven by an elderly couple. The College Station Fire Department arrives on the scene to discover the couple is trapped, and their car is leaking gallons of gasoline and antifreeze. We use the Jaws of Life to extract them, but the expensive life-saving equipment is severely damaged in the process. Several firefighters spend a number of hours at the scene cleaning up the hazardous fluids.

Who should pay to repair the equipment and clean up the mess? A few months ago, it would have been paid with your tax money. Now, the irresponsible driver’s insurance company will get the bill.

Imagine another scenario in which a house suddenly explodes. A neighbor sees the smoke and calls the fire department, which responds in minutes. The flames are quickly doused, but the house looks like it was hit dead center with a bomb. Investigators soon discover the fire was caused when a meth lab exploded. Police track down and arrest the perpetrators, but cleaning up the dangerous scene takes firefighters several hours.

Again, who pays? Last year, it would have been you, the taxpayer. From now on, it will be the perpetrators whose illegal activity started the blaze, putting their neighbors and the responding firefighters in danger.