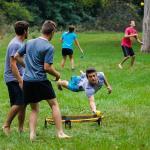 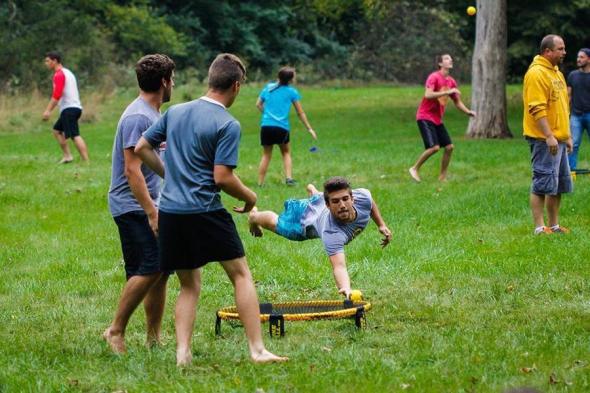 Spikeball roundnet is a new recreational sport that requires agility, lateral movement, and hand-eye coordination. It’s similar to two-player volleyball, but instead of hitting a large ball over a suspended net, players hit a smaller ball into a circular net low to the ground.

Teams can still take three touches at a time — for a bump, set, or spike — as in volleyball. The objective is also the same: hit a shot the other team can’t return.

You can participate in this fun sport that’s sweeping the nation at the Spikeball Quick-Fire Tournament on Friday, Feb. 7, at Stephen C. Beachy Central Park. In a quick-fire tournament, you play games in a few hours rather than all day.

Teams consist of two players at least 14 years old and will compete against those close to their skill level as the tournament progresses. The competitive division plays by the official Spikeball Roundnet Association rules, while the recreation division focuses on developmental skills and is more relaxed on rules.

Registration ends Feb. 5, the cost is $30 per team, and equipment is provided. Register at rectrac.cstx.gov. You can also call 979.764.3486 or register in person at the Parks and Recreation office at 1000 Krenek Tap Road.

Samantha Holman is in her first year as an event specialist in the Parks and Recreation Department. A native of San Antonio, she earned a bachelor’s degree in sport management from Texas A&M in 2018.

By Logan Cornelius, Texas Association for the Sport of Roundnet

The game is similar to 2-on-2 volleyball, but instead of hitting the ball over a net, you hit it into a net that looks like a small trampoline. Some say that if volleyball and Foursquare had a baby, it’d be named Spikeball Roundnet.

Teams can consist of as many players as possible, but only two are allowed at a time in a match. Divisions include competitive and recreation. The competitive division plays by official Spikeball Roundnet Association rules, while the recreation division is more relaxed and focuses on skill development.

Registration ends June 5 with the league running from June 5-July 17. Register online at cstx.gov/sports, by calling 979-764-3486, or stop by the Parks and Recreation office at 1000 Krenek Tap Road. The cost is $80 per team, and equipment is provided.

TASR is doing all we can to grow the self-proclaimed next American sport with hubs across the state to give people a chance to get connected with communities and athletes with a passion for roundnet. For more information on TASR Spikeball roundnet and tournaments, visit TexasRoundnet.com.

About the Blogger
Logan Cornelius (@Logan_Cornelius) is senior operations manager for Spikeball and co-founded the Texas Association for the Sport of Roundnet in 2018. He graduated from Texas A&M in 2016 after establishing the Texas A&M Roundnet Club. A resident of Dallas, he plays competitively and was a member of one of the nation’s top roundnet teams in 2018.