A fitting week to celebrate the Bear’s 100th birthday

The following message was authored by Henry Mayo, a surveyor and long-time resident of the Bryan-College Station area. As a surveyor and historian, Henry retrieves information from local, state and national resources to assemble history-themed messages for email subscribers in a series titled “This Week in Brazos County History.” To subscribe to Henry’s email series, click here.

I’m not sure if this is something to celebrate in College Station — especially this week — but former Texas A&M and Alabama head football coach Paul “Bear” Bryant would be 100 years old on Wednesday. Fittingly, the Aggies play top-ranked Alabama on Saturday at Kyle Field. The Crimson Tide’s only other visit to College Station was on Dec. 1, 1988, but it was a non-conference game that had been postponed due to the threat of Hurricane Gilbert.

According to Wikipedia, Bryant was the 11th of 12 children born to his parents in Fordyce, Ark. He played football for Alabama, then after a short stint as an assistant coach at Union University in Jackson, Tenn., he returned to Alabama as an assistant in 1936. Bryant came to A&M as athletic director and head coach in 1954 after serving as head coach at Maryland and Kentucky for nine years. 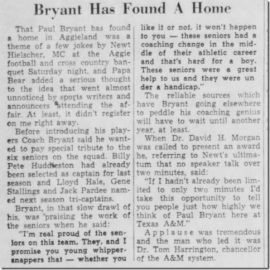 Most highlights of his history include the Aggies’ infamous 10-day training camp in Junction in September 1954. Many of the players who mentally and physically survived formed the nucleus of a winning team in 1955 and won the Southwest Conference championship in 1956. In 1957, John David Crow became Bryant’s only Heisman Trophy winner.

Bryant left for his alma mater in 1958 and became a college football legend. In his 25 years as Alabama’s head coach, he won six national championships. In 38 years as a college head coach, Bryant won 323 games and had only one losing season — his first at A&M in 1954 (1-9).

I came across plenty of articles about Bryant in The Eagle archives, but the one above from Jan. 17, 1956, tells about the postseason sports banquet after his second season.

While Bryant coached at A&M, his family lived at 205 Greenway, just north of the College Station city limits in Bryan. I believe the house was new when the Bryants moved in, but I haven’t confirmed that. At right is a photo I took recently of their former home.

Apparently, a few celebrations of the Bear’s 100th birthday are planned in Birmingham and Tuscaloosa, including a Ladies of the Houndstooth celebration called Ramma Jamma Bama Glamma:

Maybe the Aggie Band can play a quick “Happy Birthday” at Saturday’s game.

On Thursday, Sept. 12th, I begin teaching a five-class course called “The Pictorial History of College Station” at Cypress Grove Intermediate School on Graham Road. The class is part of the City of College Station’s adult education program and will be every Thursday from 6:30-8 p.m. through Oct. 17, except Sept. 26. If we mutually agree to skip one of the posted dates, we could have a fifth class on Oct. 24.

Since College Station’s 75th Anniversary exhibit opens in October at the George Bush Museum, I’m teaching mainly College Station history. This isn’t a repeat of the “History of Brazos County” classes I’ve taught the past few years, so if you took that class you won’t be bored with repeat material.

The classes will use photos, maps, newspapers, school yearbooks, etc., of College Station places, people and events. I hope for a lot of interaction and welcome you to bring image files. I can even scan them for you. The course will be taught in chronological order, but we’ll show then-and-now photos when they’re available.

Please don’t hesitate to enroll soon and bring a friend. The course costs $45, and you can register by calling 979-764-3486. If you can’t attend all the classes, you probably won’t miss too much. Besides, I’ll give CDs of most of the photos to everyone at the last class.

Have a great week!

This entry was posted on September 10, 2013 by City of College Station. It was filed under Historic Preservation, Parks and Recreation, Public Communications and was tagged with 75th anniversary, Aggie football, Bear Bryant, history, kyle field, Texas A&M.