Welcome to our live blog from the College Station City Council’s workshop and regular meetings on Thursday, Jan. 25. It’s not the official minutes.

The council received the results of an audit of the city’s procurement card program, which found the city is mitigating risk, encouraging the efficient and effective use of procurement cards, and achieving the program’s objectives. The report said some controls could be strengthened to further reduce risk. For the full document, go to pages 7-23 in tonight’s workshop packet.

Overlay districts are designed to provide additional standards for new construction and redevelopment in established neighborhoods to promote development that is compatible with the neighborhood’s existing character. A primary goal is to balance the need for the renewal of vacant or underused properties.

Planning and Development Services Staff is working with the Southside neighborhood on an application to form an NCO District for the College Park, Oakwood, and Dulaney neighborhoods. The neighborhoods feel the Unified Development Ordinance language governing NCO options are overly restrictive and rigid and asked for additional flexibility to allow more customization to better target neighborhood issues without overregulating other areas.

The council discussed the renovation of the Arts Council building on Colgate Drive and its use as a community center that emphasizes senior programming. The $973,000 project includes reconfiguring the layout to better accommodate community activities, addressing ADA issues, and replacing the HVAC.

Mayor Mooney suspended the workshop until after the regular meeting, which will begin after a short break.

Plaque No. 92 will be placed on the home at 700 Thomas, which is owned by Jim and Stephanie Russ. This home, built in 1953, is the former residence of Dr. O.D. Butler and his family. The late Dr. Butler was a legendary figure in the history of Texas A&M through his leadership in agriculture. The Russes are pictured with Mayor Mooney and HPC Chairman Lou Hodges.

Plaque No. 93 will be placed on the home at 601 Montclair, which is owned by Jeff and Brenda Hood. This home — likely built by members of Texas A&M’s Corps of Cadets in 1910 or 1911 — is among the original faculty homes to have been moved from campus into a nearby neighborhood. Pictured below with Mayor Mooney and Chairman  Hodges is resident Paul Dutton.

Rezoning in 200 Block of Holleman

After a public hearing, the council voted unanimously to approve a request to change the zoning district boundaries to Planned Development District for about 5.6 acres in the 200 block of Holleman Drive in the Pooh’s Park Subdivision. The change will allow the development of 62 detached townhouses designed for students.

Here are the PowerPoint presentations:

Land Use at Rock Prairie and Fitch

After a public hearing, the council voted 5-2 to deny a request to change the land use designation to General Commercial and Natural Areas Reserved for about 35 acres north of the intersection of Rock Prairie Road and William D. Fitch Parkway. Councilmen Jerome Rektoik and Barry Moore voted against the motion.

After a public hearing, the council voted unanimously to approve a request to change the zoning district boundaries to Planned Development District for about eight acres at 3596 Greens Prairie Road West. The change will allow the development of senior assisted-living housing that looks similar to nearby homes.

Here are the PowerPoint presentations:

The council voted unanimously to reappoint Ann Hays to another term on the Parks & Recreation Board.

Mayor Mooney adjourned the regular meeting and will resume the workshop.

The council discussed its calendar and received committee reports.

This is a live blog from the College Station City Council’s workshop and regular meetings on Monday, Aug. 25. It’s not the official minutes. 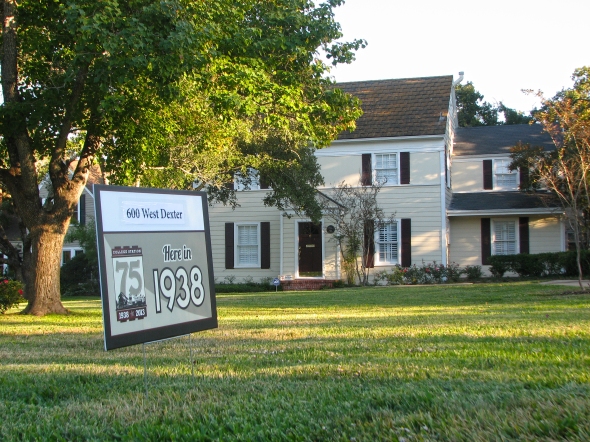 You may have noticed “Here in 1938” yard signs in front of several College Station homes, especially in the Southside area. These are homes that existed when College Station was incorporated as a city in 1938, and many have historical markers.

As the city celebrates its 75th anniversary, it’s important to recognize these historical places and the significant role that they played in our city’s history. While these are by no means the only houses here at that time, they are a good representation of homes from that era.